The place to relax, contemplate and converse with like-minded friends

Still recovering from the weekend and the 'wow' factor of being in and seeing the places where DW had strong connections.
As promised - a few piccies with connections!

Extracts from The Launching of Roger Brook:

p.25
The town was opposite the western end of the Isle of Wight but lay about four miles from the sea. It consisted of some half-hundred houses grouped round the quays, where a widening of the river Lym formed a small natural harbour, and a single long street that ran up a steep hill to westward of the old town. Just above the crown of the hill the High Street divided into two narrow alleys passing either side of the Town Hall, with its stocks, blind house and butchers; shambles, (all now demolished) then uniting again in a broad thoroughfare as far as the church. Beyond this lay a straggling ribbon of houses, known as St. Thomas's Street.
[align=center]

View of the Church, 2006, looking west from High Street to St Thomas's Street[/align]
It was from this western end that Roger entered the little town and on reaching the church he turned seaward, down Church Lane, a few hundred yards along which lay his home. The house was situated on a gentle slope to the south of the High Street and separated from it by gardens, a strip of woodland and a large meadow. (reference to Grove House, DW's home, also now demolished)

p.61
Entering Lymington from the west he rode past the church, up the High Street and through the low arch that gave on to the stable yard of the Angel Inn.
[align=center] 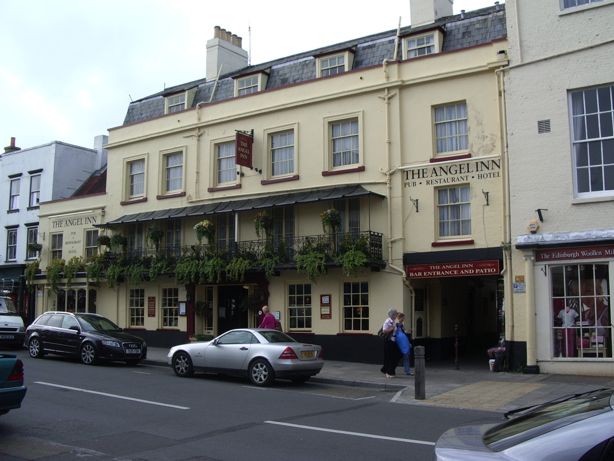 p.67
(from the churchyard).. he ran back to the road, arriving in the High StreetÃ¢Â€Â¦. The street was empty; most of the townsfolk had been in bed for the past hour and the only light that was to be seen came from an upper window in Monmouth House, on the corner of Church Lane.
[align=center] 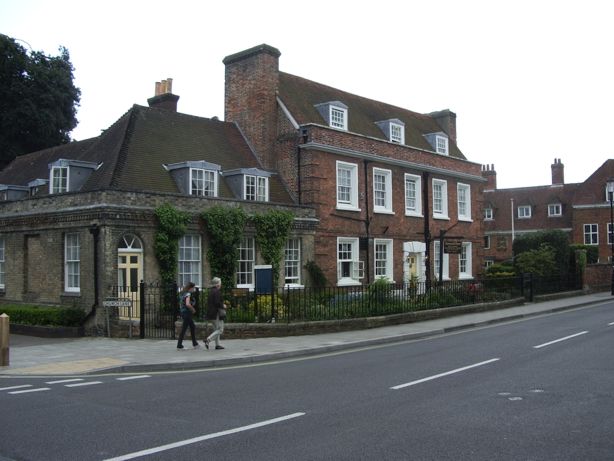 Monmouth House, 2006[/align]
Ã¢Â€Â¦..Roger crossed the street and made his way along it, past the bow windows of the now shuttered shops and the few private dwellings interspersed among them; but some way before reaching the Town Hall he turned right, entering a narrow gap between two buildings. The alley, known as Aishley's Lane, (still there, now known as Ashley's Lane) was less than a hundred yards in length but continued as a footpath which led straight down the hill between an open field on the one hand and the meadow and walled kitchen garden of his own home on the other.

Strangely, due to DW's amazing attention to detail, I really felt as if I was tracing the movements of a genuine historical character.
[hr]
As referred to above, DW's Grove House was demolished in 1969 and the land used for re-development. However there were some stipulations attached to the redevelopment, namely, that the retaining wall and as many trees as possible remained untouched.

This is fortunate for the DW obsessive, as most of you will be aware of DW's serious hobby of bricklaying. He says in his Saturdays With Bricks that during his 15 years occupancy of Grove House, he laid over 60,000 bricks and 3,000 blocks. One of his particular skills was in building 'serpentine' walls (i.e. single-thickness wavy walls) and the boundary wall facing Church Lane still exists:
[align=center] 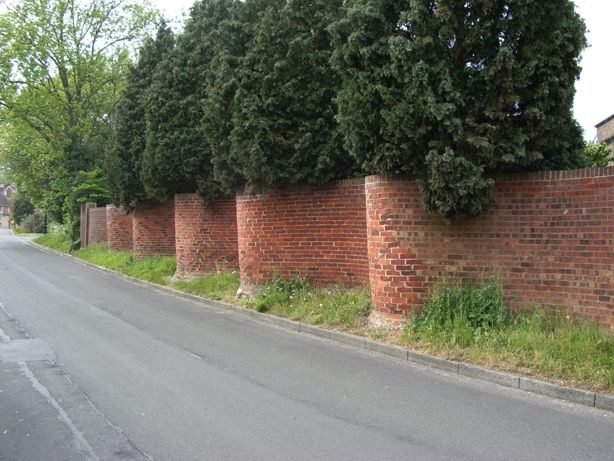 Serpentine Wall, Church Lane, 2006[/align]
Also remaining are about 4 bays of a 200 foot serpentine, which now form a boundary wall for one of the new properties; part of wall of concrete blocks, which he constructed to enclose a field; and finally, still existing is a long straight wall 11 feet in height and 108 feet in length which protected part of his garden from north-easterly winds.
[hr]
The weekend was not nearly long enough and there is still more research to be done, e.g. where is/was Georgina's tower, do any sketches/pictures remain of the old Town Hall which used to be situated in the middle of the street, etc. etc.? Well worth another visit in the not too distant future. And the food in the Angel is well-worth returning for!
Top

Thanks so much for posting these. naturally, I like the wall best--to see something DW actually built. (Also, I haven't read enough Roger Brook for the others to mean anything special to me...)
Top

Jim wrote: (Also, I haven't read enough Roger Brook for the others to mean anything special to me...)

I assume that's going to be rectified?
Top
Post Reply
3 posts • Page 1 of 1